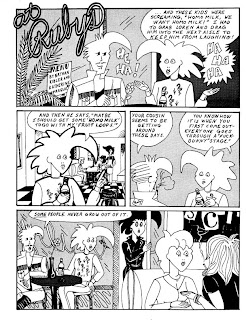 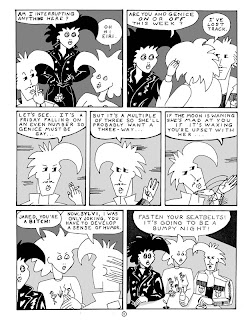 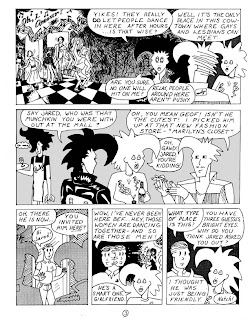 Here are some of the elusive pages that have never before been published.  I will post as much as I drew back in 1990, when I was last working on this. I'm not making any promises, but I have some notes which expands the story to include some "adventure" characters that Kathy and I developed.  Because they don't really fit with Loren and Sylvia, they will likely appear in a dream.  I also have sketches of versions of the Loren and Sylvia characters that were intended for potential dream sequences, so this is not so much out of the ordinary.

In these pages we are introduced to Jared, Sylvia's awol roommate; Erie, their straight friend who has a sister living with her; Genise, Sylvia's on-again-off-again girlfriend and notorious neighborhood bi-sexual; among many more characters.  The story has a lot going on behind the scenes, but I think it is an accurate portrayal of the lives of college age students learning about sexuality.  Of course, Sylvia is old-hat at it, but later she does find her desires acknowledged.  Oh, wait! I can't give away secrets too early!

I packed a lot of little bits of information into these drawings and some artistic bits.  You can find collage clippings scattered in the background as artwork and posters, reflecting the modern environment Loren and Sylvia inhabit.  These are pretty subtle reminders that these characters have lives beyond the panel.
Posted by Nathan Kibler at 5:12 PM