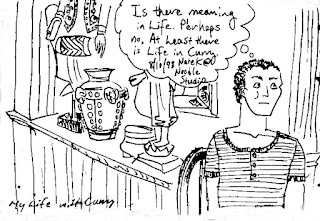 At some point, I scanned this image from one of my sketchbooks that I originally drew in August of 1998 after I'd returned to Seattle from my year away in '96. At the time there was a favorite Thai restaurant on Broadway at the epicenter of Capitol Hill, called "Noodle Studio". Some of my readers may remember this restaurant and recognize the sculptures I drew in the background of this "portrait".

I remember feeling very melancholy about having to dine alone on that day, but I was celebrating my ability of finally being able to take myself out for a nice dinner, something I hadn't really done in over a year and a half. As the image illustrates, I was wearing contacts and cutting my hair quite short. Also, the whole situation found me in quite the contemplative mode.

Anyway, despite the poor scan quality I am sharing it now because it has been so long since I've cared to post anything new and I know it will be quite some time before I share much from this particular sketchbook as it is chronologically late in comparison to the early ones I've already shared. I look forward to the time when I can share it.
Posted by Nathan Kibler at 9:25 AM 2 comments: