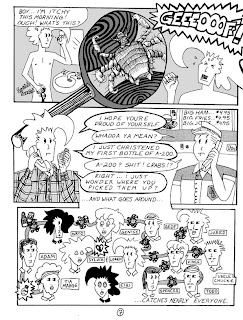 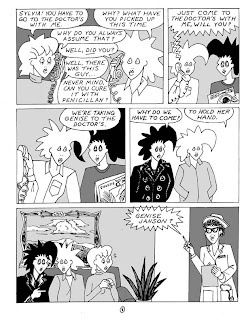 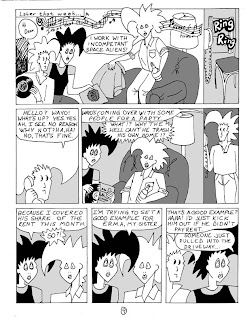 Other influences include the master of the panel comic, Charles Schultz and the editorial strip, Garry Trudeau.  Here we are introduced to a role call of "Loren and Sylvia" characters.  Besides Uncle Chuckie, who is mentioned but doesn't appear until later in the story, there is Adam, who is Tia Marge's beaux.  He is primarily a background character, but we wanted to show that even Tia Marge, who is clearly much older than most of the other people in Loren and Sylvia's lives, has a sexual life and the good sense to be knowledgeable of her partner's sexual behavior.

Perhaps the biggest enigma presented here is Sylvia's liaison with Genise.  You can assume they were highschool sweethearts of a sort, but there is still plenty of emotion between them.  But I don't want to spoil what happens next with too much information, so I'll stop here.

Just one more comment about background material, though.  I've peppered these scenes with references of music we were listening to at the time.  Can you guess what they were?  The first person to post all of them correctly in a comment will be eligible for a complimentary copy of the premium comicbook, when it is done.
Posted by Nathan Kibler at 11:02 AM