Loren and Sylvia together again 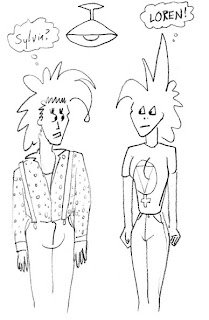 I met my friend Kathy Sprague back in the late eighties when I attended college.  She was an open lesbian living in the college town where she grew up.  We became fast friends after meeting at the local Science Fiction Association which held a small fan convention once a year and met monthly on campus.  We  immediately started bouncing ideas off of each other for science fiction characters, and then eventually wrote a comic book together we based on our own lives, called "Loren and Sylvia".

I created the first nine pages of the comic book in a whirlwind week of drawing between finals and the holidays.  These pages Kathy later published with two other comic stories by other people in a one shot called, "Feedback".  I added several more pages to the original nine, but never got around to publishing them together again.  I hope to offer them again here as a premium, but I'm not making promises.


Here's a short synopsis: Loren and Sylvia are cousins.  Loren is a virgin and has moved to town, but is looking for a new roommate.  Sylvia is looking for a roommate also, so suggests he move in with her.  Then Loren expresses his desire for his cousin, who scoffs and points out that she is gay.  Later Loren decides he's gay also and has a quick fling with one of Sylvia's friends who've dropped by to get high.  Hilarity and broken hearts ensue.
Posted by Nathan Kibler at 4:10 PM 2 comments:

Maverick DeGable--in the style of "Loren and Sylvia" 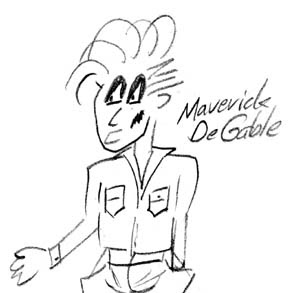 This is one of my first original characters, although he is a sort of gay James Bond and I was inspired by an R. Crumb comic.  I drew this back when I was in college and had come out a few years before and was still exploring my gay identity.  I was thinking about the sorts of characters I wanted to read about and Maverick came up as a government spy who would infiltrate the more conservative factions and subvert the status quo.  This was long before "DADT" caused many military people to do similar things.  Unfortunately this is the extent of the character in my mind, so I never invented any adventures he would star in, but there is always a chance I could be inspired now.

Because I was drawing a lot of "Loren and Sylvia" stylized characters at the time it seemed reasonable to draw Mr. DeGable in a similar manner.  I will be posting more "Loren and Sylvia" sketches next and as I have now uncovered my archive of the comic, eventually I will be posting it here as a premium.
Posted by Nathan Kibler at 12:47 PM No comments: