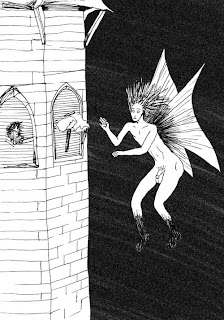 I knew about H.P. Lovecraft by the time I started working for Collectors Bookstore in the Pike Place Market during the early Nineties. Collectors was a small store down just one of the ramps to the lower floors and across the hall from a Chinese cafe that served dim sum. It was run by the same couple that own Golden Age Collectables, the comic book store that has been an anchor store in the Market for many decades. On Collectors's shelves held a wide range of books including many regional titles, cookbooks and a children's section, but they specialized in hardbacks and special editions of Science Fiction, Fantasy and Horror books.

This is where I learned how popular H.P. Lovecraft's stories are. We barely could keep hardback editions, from the notorious publisher, Arkham House, in stock, they were so popular. Of course, nowadays, years after role-play gaming has brought much of our American fantasy literature alive for younger generations, as well as, film and other popular media, Lovecraft is mined by such popular properties like South Park.

I mention my stint at Collectors because it was at that time that I decided to read some of his stories, which I'd avoided partly because I didn't want to believe what every fanboy (and quite a few fangirls, too) I'd talked to said, "he is one of the best, most influential horror writers of the twentieth century. And his monsters 'kick ass'!" A friend offered to lend me his cherished paperback, collecting short stories by the author. And so, I read.


Lovecraft is not a terribly easy-to-read writer, although his style is similar to many writers who've taken a page from Edgar A. Poe or the lesser known Sheridan Le Fanu; but Lovecraft manages to ease you into his ideas so that by the end of the story you are truly startled by what happens and he does it often without being explicit about what does happen. In other words, he enlists your own imagination against you, so you fill in all the details he leaves out. For example, my favorite story in the collection I read (I don't remember the collection's title now) is "The Music of Erich Zann" which involves little more than the interactions between a lodger and his upstairs neighbor, who happens to play the most strange music at night, keeping the protagonist awake.

You can imagine there will be an intense final encounter with the mysterious musician, but I won't elaborate more, because the story really stuck with me and it is certainly worth tracking down and reading. Anyway, I soon outlined a sequence that I still think would make a wonderful animated film. In researching this post, I stumbled upon a few attempts by people recently who do just that. Nothing notable enough to link, but if you're still interested, a search will get them. Anyway, as I come across my drawings for the sequence I will make mention of them.

Now for the above illustration, which unfortunately is something of a spoiler if you haven't read the story it's from. I don't remember the story name, so perhaps you will be surprised anyway. I barely remember the story, but I think it was about an old abandoned cathedral on the top of a hill. A man sees lights in one of the cathedral towers and later decides to investigate. The protagonist climbs to the top tower where he encounters recent evidence of someone performing an occult ritual, burnt candle wax and charcoal markings on the floor. One of the tower windows is boarded up and the cracks filled with fabric. Upon breaking back some of the boards the protagonist encounters a creature that carries his likeness, but is naked, has wings growing out of his back, his hair is frizzed out and his feet are blackened, as if he was hit by a bolt of lightening.

My attempt to research this story didn't elaborate further, but short of rereading all of Lovecraft's writings, which I think I would enjoy, I still do not know if the seraphim-type creature is unique to this story or occurs again. I was so taken by Lovecraft's description of it, that I had to draw my version of the moment before the protagonist opened the shut window. I had a distinct impression that the wings were not typical or traditional, i.e. bat-style or bird-style, but more like fans or fins. After reading these stories I began creating my own impressions of his creatures, based on dreams I had featuring them. I will have to dig around to find them before I can post them here.
Posted by Nathan Kibler at 12:42 PM 2 comments: 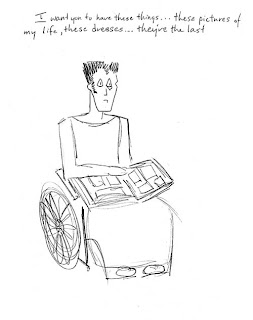 My sketchbook often becomes the resting place for all the ideas that roll around my head. For example, this image depicts a story that I originally thought of as a response to the AIDS crisis that was prevalent through the Nineteen Eighties and Nineties. I know for one, working at a gay bookstore through the early Nineties, gay men were not really looking for stories about living with AIDS. We always sold more porno than literature at the bookstore. Too many men were already living with HIV and preferred to come to the bookstore as a way to escape, not be reminded of their illness. By the late-Nineties mainstream publishers were beginning to recognize there was a gap in gay literature that was vaguely "AIDS-shaped" and began publishing books like Micheal Cunningham's A Home at the End of the World.

Anyway, my story was going to be about a young drag queen who, before he dies, gives his trunk of dresses and scrapbooks to the volunteer who befriends him in the hospice where he's attempting to recover. She is naive and is emerging herself as a whole person, into a world where the consequences of your actions determine what happens to you. In the process of the story she would meet an older man who she has sex with and then has to become a single mother because she does not want to marry. Year's later her son discovers the trunk in the attic and asks her about it. She then discovers her own son has an affinity for cross-dressing.

I have to admit, I didn't take the scenario very seriously. It is overly sentimental and dramatic without really tying the relationships together, save the memory trunk. For me, I was more interested in the drag queen who dies than the young woman who seemed to me wanting to take over the story. I knew it wouldn't go anywhere, but it is still here as an image in my sketchbook, just in case I change my mind and attempt to turn it into something more than just an idea.
Posted by Nathan Kibler at 5:45 PM 2 comments:

Email ThisBlogThis!Share to TwitterShare to FacebookShare to Pinterest
Labels: A Home at the End of the World, AIDS, drag, Micheal Cunningham, sketchbook


I skipped a week of posting, but I have a good excuse for myself. This weekend I attended the 2011 Emerald City Comicon at the Washington State Convention Center in Seattle, Washington. I mainly volunteered for the PRISM Comics booth, which is a non-profit organization dedicated to promoting LBGT (Lesbian, Bisexual, Gay and Transgender) comicbooks and creators. Jon Macy also was in town, with several other creators I'm pleased to have met. 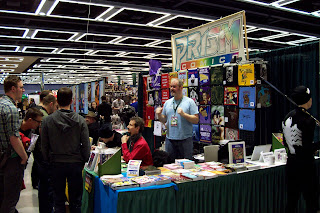 Zan Christensen (standing) organized the booth and I have to thank him for allowing me to volunteer. Thanks, Zan! I had a great time, I met many different people and even hooked up with my friend Maxxwell Mcguire.

Here are some more highlights of the event that I photographed: