Art show entry about my childhood 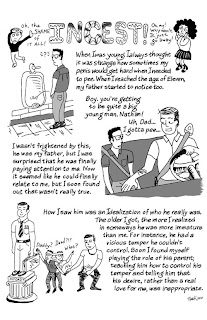 Jon Macy asked me to submit comic book art for his show Dirty Comics at the Center for Sex and Culture in San Francisco.  This is an autobiographical piece I did many years ago in a letter to a friend, explaining my childhood with my father. I need to point out I still have a good relationship with my father, which is more than I can say of my siblings. He will be Eighty-years-old this year and I am grateful that I am his son.

Both my parents came from broken and abusive families, which they visited upon their children in different ways than they experienced from their parents. This is not to say they did not love us or that the abuse was intentional. In many ways, their view of the world conflicted with reality and they were doing what they thought was best for them.  Still, I learned to forgive early in life.

This is what I believe saved me, because I learned pretty quickly to refuse my father's advances and forgive my mother for not confronting what happened, especially when we children came to her for support. Their experiences with their own parents are what shaped how they treated us. Even today I have to be mindful of their common failure to meet me as an adult and accept me as I am and my own failures to forgive what happened.

Eventually I got over the limitations of my relations with my parents and learned to be myself. I entered college, came out as a gay man, survived my parents divorce and my father's own subsequent coming out as a gay man. I sought what I could not find in my family at college, then failing that, dropped out, moved to the city (my father soon followed me) and decided to live for myself instead of living for the approval of others.

It hasn't been easy. I've learned a lot about myself. I haven't always liked what I've encountered, but I've learned to be a better person and to be honest with myself and everyone I encounter. It is easier now, doing what is best for me.
Posted by Nathan Kibler at 6:00 PM 2 comments: 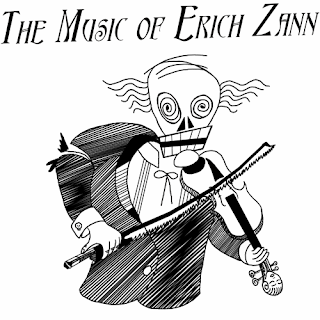 Having posted this spring about an unrealized animation project, I was inspired to clean up two of the sketches and offer them as promotional items. Here is Erich Zann as the crazed musician the protagonist encounters in the garret on the top floor above his apartment. 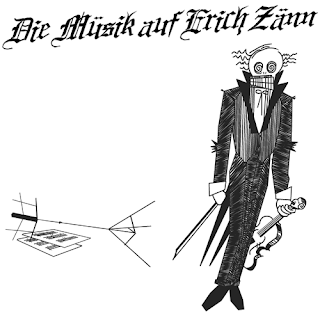 Posted by Nathan Kibler at 8:14 AM No comments: