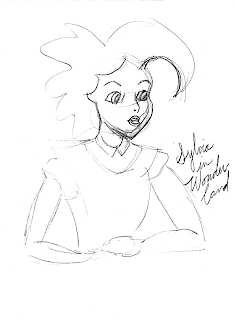 My all time favorite books are the two Alice books by Lewis Carroll aka the Rev. Charles Lutwidge Dodgson, so it was only with time that I'd think of injecting it into Loren & Sylvia.  Afterall, another of Carroll's novels was called Sylvie and Bruno, but the truth of the matter is this:

I originally attempted drawing the Disney version of Alice for the 1951 animated film.  Kathy had come across it in my sketchbook and made the astute observation that it looked like Sylvia from our comicbook.  That naturally lead me to attempt more adaptations of characters from our story. 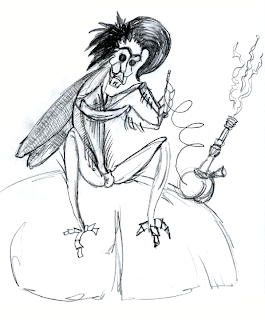 This is a foiled attempt at drawing Wayo as the hookah-smoking caterpillar.  Only he came out more like a preying mantis.  I didn't like this version so I did another following a more traditional interpretation of the character. 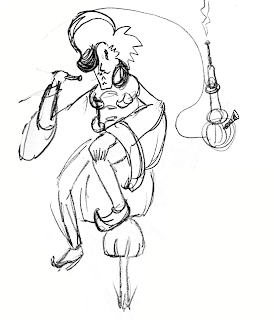 Somehow this one is even less satisfying, but it does follow the Disney version somewhat.  The Persian shoes with turned up toes seem to have migrated his way.  And I think those claw like things on his chest are supposed to be multiple arms the caterpillar would have along his trunk.

Of course that lead to more characters: Genise as the white rabbit, Erie as the mad hatter and perhaps a lesser known character, the mock turtle, portrayed by Spencer.  I guess Todd would be the griffen, perhaps Jared would be the Red Queen and I'd want Loren to be the cheshire cat.  I so thought Sterling Holloway did a wonderfully fey version of the cat.  And Sylvia of course is Alice, but that says something about her character, what with all the temptations of bottles that say, "Drink Me". 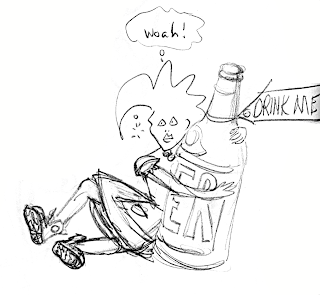 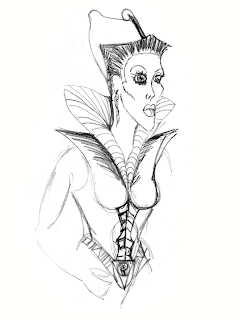 For some reason, I don't remember where this came from outside of what it appears to be.  I've always been interested in ancient Egyptian religion and so I suspect this could be an extrapolation from a conversation of what an Egyptian priestess might look like.  It is a decidedly campier version than I would do now as I know much more about ancient Egypt society than I did twenty years ago.  For example, I think that headdress was pretty much reserved for royalty.

Anyway, she certainly has an elongated face and looks more like one of my drag portraits than a woman. I might use this for a character design somewhere, so she may morph into something different. That collar and sholder wings are quite unique.  Hmm, that beltclip looks like clue.  Could this be a missing character from Paula and the Purple Rayz? I wonder?
Posted by Nathan Kibler at 8:41 AM No comments:

Email ThisBlogThis!Share to TwitterShare to FacebookShare to Pinterest
Labels: Paula and the Purple Rayz, sketchbook 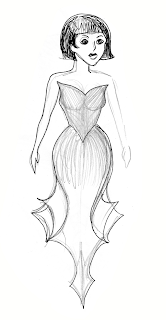 Gee, I wonder if TMT ever recorded the song that the Mills Brothers made famous?
Posted by Nathan Kibler at 8:30 AM 1 comment: 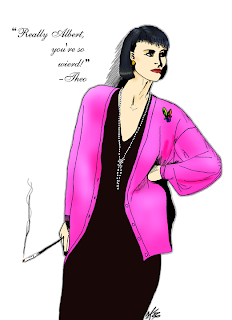 I was thinking this portrait of Theo would come out more conservative, but once I saw it in this hot pink all the memories of hot pink sweaters from the late Eighties came rushing back to me. Hideous, really, although somehow Theo seems to pull it off with aplomb.  She manages to express a unique combination of sophistication, world-weariness and relaxed irritation.  I'm glad that she does not haunt me anymore.  I've even put away my high heels and no longer have any desire to dress up and express myself this way.  But I have my memories and these pictures, although they are only sketches, which I can share with you.
Posted by Nathan Kibler at 3:40 PM 2 comments: A Naga is a legendary creature from India usually a feminine form emerging from a snake body.  I was thinking in terms of a Halloween costume, so I wanted a male version and figured less than the Medusa-like creatures that are often depicted, this one would be more sophisticated and cultured.  I gave him an "Astroboy" hair-cut and low-cut waistcoat.  I suppose I was also trying to figure out a way to make a pun about a "naga-hide".
Posted by Nathan Kibler at 8:28 AM No comments:

Email ThisBlogThis!Share to TwitterShare to FacebookShare to Pinterest
Labels: sketchbook 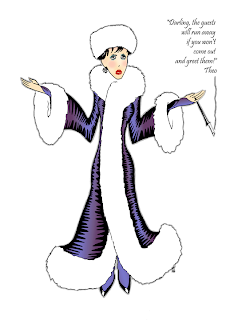 It's another colored Theo portrait available as a tee shirt from CafePress.com.  My designs are eclectic, campy,  unique and printed on a tee shirt makes the best holiday gift.  Inspire others to be true to themselves or encourage your own party spirit.
Posted by Nathan Kibler at 11:47 AM No comments: 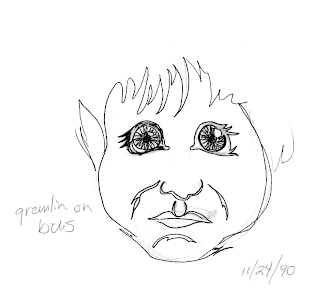 I don't often date pages.  But I do remember riding a bus south of Seattle and finding this child charming enough to attempt a quick sketch.  You can see how I used the jostling of the bus to suggest brush lines.
Posted by Nathan Kibler at 7:52 AM No comments: