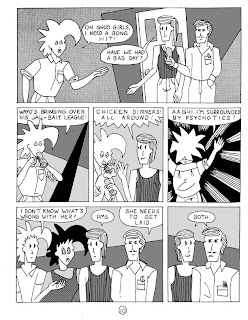 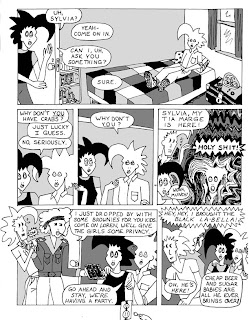 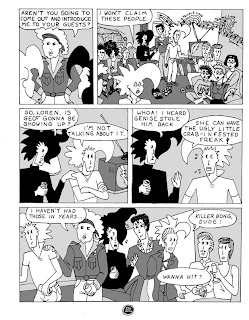 I took a week off posting more Loren and Sylvia for the Comic-Con in San Diego.  No, I didn't attend...I hear it was quite the event as it always is, but I was actually busy camping in the mountains and since there has been little commentary or interaction here (thanks for your comment, Carolyn!), I figured I was safe while many of the comicbook geeks are out of town. I doubt many of them are reading here...:P

There's not much to say other than the introducing of even more characters.  I think this was a problem with Loren and Sylvia, the list of characters began exploding exponentially as the party scenes kept getting wilder.  We get to see Adam, Tia Marge's beau hitting on Wayo, Sylvia's co-worker.  Remember from the "crab" chart, they've already done "the nasty".  There's another musical reference, and I really can't remember if we named all the kids that show up at this party.

Eiri's sister, Erma is here with a new boyfriend Randy and two girlfriends.  Randy brought along a couple of friends, including the mo-hawked punk.  It may be a problem to name them all correctly as I didn't keep copies of the scripts and I haven't spoken to Kathy in many years, assuming she kept them.  I think in the long run it doesn't matter as what was written is soon to run out.  I don't have immediate plans to add anything new, although I've begun to assemble notes I've made over the years and I do hope to have something more complete as a premium eventually.
Posted by Nathan Kibler at 1:09 PM