Nearly every gay man I know has encountered the images of Touko Laaksonen, sometimes early in their life, and had a physical reaction. I knew of his images long before I came out as a gay man and combined with Richard Corbin's "Den" stories in Heavy Metal magazine, I can say encountering them was an awakening for me...and I don't just mean physically. Mine is a sketch of a famous Tom of Finland tableau I found in an art history book in the college library. I think I wanted to see how well I could copy the tonal qualities of the original, because I am not usually drawn to leathermen bikers as a rule. Alas, I have very little patience when I am drawing, so this remains a hint of the original.
Posted by Nathan Kibler at 1:02 PM 2 comments:

"Teleny and Camille" by Jon Macy

Shirtless doodle in the style of "Loren and Sylvia" 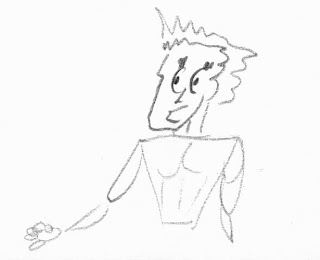 Back when I was in college I met my friend Kathy Sprague. Kathy was also gay and helped me find my way out-of-the-closet. I admire and appreciate the open example she set for me and despite our lives diverging, I still consider her a dear friend.

We collaborated on a comic book, based somewhat on our lives. Our alter-egos were named "Loren" and "Sylvia". There is also the syndicated comic by Nicole Hollander with the title "Sylvia", but we felt safe using the name because we were telling deeply personal stories, which had nothing to do with that strip. I share here the one issue of "Loren and Sylvia" that Kathy self-published, plus unpublished pages.

Anyway, I drew "Loren and Sylvia" with a distinctive stylized shorthand for creating characters like I'd seen done with other popular comic strips, like "Peanuts" and "Doonsbury". This doodle of a shirtless male is an early attempt to draw a character in this style without clothes.  It looks a little like "Loren", but I doubt that is who it really is.
Posted by Nathan Kibler at 4:25 PM No comments:


This next series of images feature men. I tend to think about men a lot and how they appear to me. This includes how I appear to myself. My purpose is not to be crass or rude, but to depict the truth I see, which is perhaps the only way I can do this. I can only hope that you enjoy what I put down on paper.
Posted by Nathan Kibler at 10:48 AM No comments: 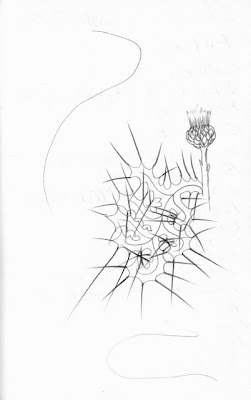 I have always been inspired by Art Nouveau design. This design is an early inspiration which lead to my friend Tod requesting I design a tattoo for him. The sketches that I did subsequently are in another sketchbook and I will tag them with this one when I post them. I have very few photographs of Tod right after he got his tattoo, but I can say this sketch was the first inspiration.
Posted by Nathan Kibler at 3:03 PM No comments: 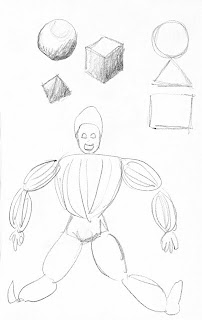 Back in the late eighties, I remember the English musical group New Order did a video for their song "True Faith" featuring costumes modeled after designs by a surrealist artist. Unfortunately I never paid much attention to who the artist was, but the costumes made the wearers seem to be clownish because they obstructed movement. It didn't make much sense, but the images persisted in my brain until I had to jot them down.
Posted by Nathan Kibler at 2:21 PM No comments: 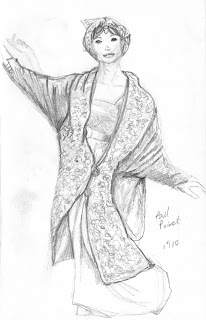 Ah, yes...a coat by Paul Poiret. This sketch of a fashion photograph looks like it is from the height of Poiret's oriental-ism. I've always been a great fan of fashion design from the beginning of the previous century, especially the nineteen-twenties and nineteen-thirties. In College I collected Tom Tierney's books of paper dolls published by Dover for my own reference. Unfortunately his copies of the Erte collections are no longer available, nor are Dover's reprints of fashion catalogs containing Erte's designs. But Dover has continued to publish other designer's works and Poiret is a favorite.

The shape of the coat which is emphasized by the stylized pose of the mannequin is similar to how a robe or kimono might drape, only Poiret has used fairly modern western forms to achieve this with a wide embroidered lapels and a frog clasp.  I suspect the fabric is silk velvet in either brown or avacado green. The sleeves seem to be gathered, as well as the back which seems to gather below the knees, just above the lower edge, creating a unique form that you only see in coats from this time period.

I did a short series of sketches featuring fashion models and clothing back in my college days, although I mostly shared them with close friends. I named the model in each sketch Theo, after my grandmother and sometimes gave them captions as if they were speaking to someone off page. In this sketch I was thinking of my boss at Waldenbooks at the time, so she looks somewhat different to the original model, who I think had a triangular face. Clearly I didn't want to lose the effect of her pose so I redrew the part that went off the page above her right arm.  Her hat looks as if she's wearing a cleaning woman's scarf, but I assure you the original was worth my recording it here.  Too bad pencil smudges.
Posted by Nathan Kibler at 5:46 PM No comments: