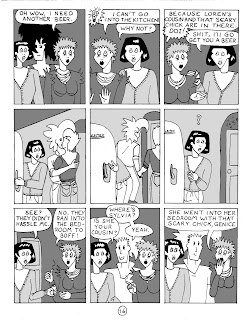 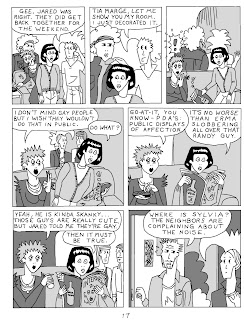 So, here Erma's girlfriends, Roxy and Tabo, interact.  Blatant homophobia from people who thought they were tolerant of gay people is a theme both Kathy and I have experienced in our lives.  I can still encounter it from my family members sometimes, which is quite unfortunate.  All the same, I am happier that I feel I can live my life more openly now than when I first came out as a gay man.

One other point about the characters, in the final panel Uncle Chuckie comes in the front door.  He is Sylvia's landlord.  I don't remember if Tia Marge and Uncle Chuckie were related, but I think we had decided they came from opposite ends of the family.  I suspect that they don't really like each other, but I suppose that will have to be revealed later.

I'm sorry to leave this on a cliffhanger.  Unfortunately Kathy and I didn't write more script after this point and this is all the artwork I created.  There is more story to be told, but you will have to wait until I get to the point of creating more pages.  Part of why it has taken me this long to post these two final pages is the last page, seventeen, was unfinished.  I feel like I rushed it to get it to post, so the lettering is perhaps not my best work.

After all, it has been nearly seventeen years since I've visited this and my lettering hasn't improved in all this time. I may have to figure out a font that will go well with the artwork and re-letter the whole thing.  Some of what I want to add is a prologue, introducing more facets of the characters involved.  At one point, I jotted down some ideas for a dream sequence where Jared appears as the Sphinx of Egypt and my idea at this point is this dream will include some of the other characters that Kathy and I first experimented with.

I'm going to go back to posting pages directly from my early sketchbooks.  There is quite a bit of development of characters for a story line called, "Paula and the Purple Rayz", which was our riff between early Wonder Woman comics of the thirties and forties and the late eighties "Jem and the Holograms" animated television series.  Kathy and I talked about developing it into a comic, but before we got too far with that Kathy was inspired to write a radio play, which she produced through the student radio station at the University of Idaho.  We enlisted all our friends to play the different voices and it was a lot of fun to record.
Posted by Nathan Kibler at 5:28 PM No comments: 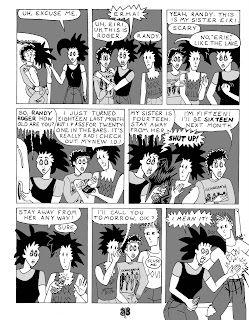 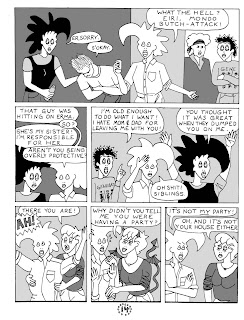 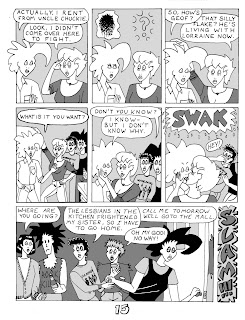 I just completed a web remodel for Jon Macy, which is why there's been no activity here...and not because I'm making any excuses for finding my time filled.  I do admit it allows me to plug his new edition of Teleny and Camille, although I am likely to do an actual post about it once I've posted everything I have for Loren and Sylvia. Anyway...

Here we meet Erma's new beau, Randy and get to see Eiri and her sister go at it.  Both Kathy and I have younger sisters, so you can imagine how we've fared in these situations.  Eiri, of course, thinks she's protecting her sister, when in fact she's exhibiting her sublimated homophobia (irrational fear of homosexuals for any of you unfamiliar with the term).

Also Genise and Sylvia make up for the moment.  I think this all speaks for itself.  Poignant but ironic relationships are the most difficult.  We also get a better look at Erma's friends, Tabo and Roxy.  We will see more of them next time.
Posted by Nathan Kibler at 5:13 PM 2 comments: