Review: Joys and Fears of Childhood


Long time acquaintance and cartoonist David Kelly collects his self-published works in a new publication by Northwest Press. Steven's Comics, serialized in several gay newspapers during the nineties was written for all-ages in mind. Kelly explores the trials of growing up gay in a single-parent divorced family. Seeking strong role models within Wonder Woman comics and discovering the joys and fears of a childhood crush, David mines similar childhood emotional territory explored by his friend and fellow comics creator Lynda Barry, while remaining true to the unique story he has to tell. I am pleased to see this collection. But that is not all as he will include new material, and if that is not enough Dan Savage provides a forward. If you don't buy it for yourself, then give it as a gift to your favorite baby-gay. They will thank you for years to come.

View all my reviews
Posted by Nathan Kibler at 8:53 AM No comments: 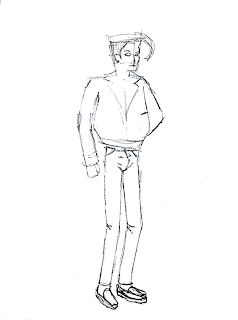 There is another look outside of the leather jacket that I've noticed gay men sometimes adopt.  Penny loafers, pegged jeans, wind breaker and white t-shirt was a look that James Dean popularized after his appearance in Rebel without a Cause.  Perhaps the most celebrated person to adopt this look is the former Michael Jackson, although he added his own effected touches.
The clothes evoke the nineteen fifties, but since then seem timeless.  Add something unique like Mr. Jackson did and you are evoking a subsequent era.  It is a post-war, pret-a'-porter masculine look that can transform even the most willowy lesbian into a dyke.
I prefer it on men and wore it like a uniform for years.  I always wanted to be Dean in Rebel without a Cause if only because Sal Mineo looked up to him and set him on a pedestal.  I didn't care for the story though and always imagined that Sal Mineo inherits a ton of money, rebuilds the burned out mansion they play house in and lives with Dean, while Natalie Wood goes on to New York and becomes famous.  She could come back and try to mess up the relationship, but Dean would set her straight and she'd have to leave for Paris.  Hmm, I wonder...
Posted by Nathan Kibler at 8:20 AM No comments:

Email ThisBlogThis!Share to TwitterShare to FacebookShare to Pinterest
Labels: James Dean, Rebel without a Cause, sketchbook 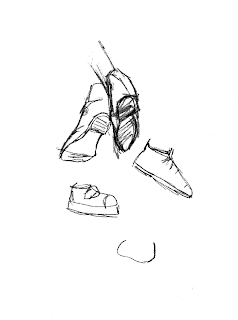 I'm always amazed when an artist confesses to being afraid of drawing feet or hands.  It seems that because we use these appendages so unconsciously that drawing them, for some people, is nearly impossible.  I never had that problem, but I was never very interested either.
Feet often fall outside the frame. HR advisors often suggest that you consider the condition of someone's shoes before hiring them.  Shoes do take on a variety of shapes from different angles, so depicting them accurately can be a challenge.  Thankfully I don't have a lot of shoe practice pages in my sketchbooks.
Posted by Nathan Kibler at 8:15 AM No comments: 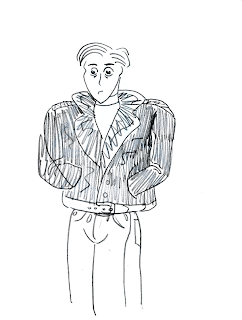 One item of clothing you will see gay men wearing above all else, it seems, is a leather jacket.  It doesn't matter what else they are wearing, a leather jacket has moved far beyond The Wild One and now inhabits a place in modern iconography that says something more than I own a motorcycle.  Of course, to complete the image you'd need those other accoutrement: boots, jeans, a white t-shirt, mirrored sunglasses, a high-and-tight haircut, a helmet (preferably black with no striping) and a hawg or some other appropriate motor-cycle.

When the jacket is removed from this environment it says something completely different, but it often screams, "I am a victim of fashion!"  I remember a friend being so proud of his new leather jacket that he wore it constantly, until he developed a rash and sore on the second day from the edge of the coat rubbing against his torso.  As with all things, moderation is key.

I held off owning a leather motorcycle jacket for years until one day, upon walking to the Vogue nightclub in Seattle, a friend and I met a man who was selling his jacket on the street.  He was on a cross-country trip, having driven from the east coast on a motorcycle, and now was heading into the mountains to hike.  Not wanting to carry such a heavy piece of clothing he was willing to part with it for a reasonable sum.  I adored that jacket, not only because it fit me well, but because it had many stories to tell.
Posted by Nathan Kibler at 8:30 AM No comments: 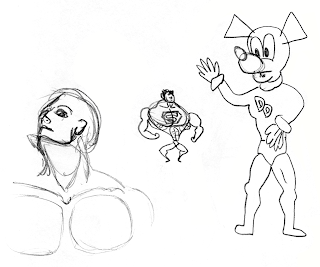 I was clearly thinking about superheros when I did the above doodles.  "Danger Dog" is a riff on a British cartoon series Nickelodeon ran back in the Nineteen-eighties, about a secret agent superhero, called "Danger Mouse".  That is a muscle bound superman in the middle. The man on the left seems quite full of himself or perhaps he's seeing a bird or plane, over there.

When I started keeping sketchbooks, I discovered these doodle pages appearing between the intentional pages. I often told myself I was just bored and reflecting that frustration by jotting down the noise that filled my mind, but I was also capturing elusive ideas that were barely formed in my mind.  Although I didn't know what I was doing at the time, I now have something to show for it anyway.

Blogger has a great feature that allows you to post ahead of yourself, which is a tool I used back in early November in anticipation of the holidays.  Unfortunately I lost some of my posting momentum because I allowed myself to wait out the time I gave myself instead of using it to stay ahead.  I continually remind myself that I am more conscious about stumbling blocks like procrastination.  I know working on my various projects and setting goals for myself is a continual process, even when I'm working on other things, otherwise I loose my momentum.

I do want to thank everyone who has taken the time this past year to read this blog and visit my website.  I really appreciate the feedback here and on Facebook.  Thank you all.
Posted by Nathan Kibler at 8:25 AM 1 comment: