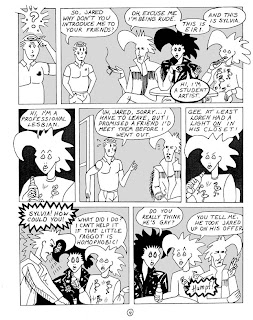 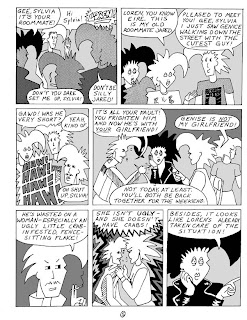 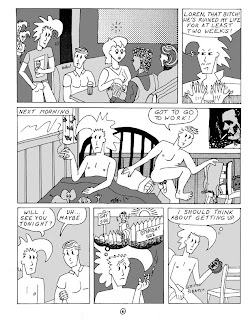 Sylvia is a complex character and not simply because she emphasizes her recycled bonmots by brandishing her beer bottle.  She sees the world through her own uniquely-colored lavender spectacles. She wears her pink flamingo sweatshirt not only because it is a practical piece of clothing, concealing more than revealing, but because it declares her affinity with things absurd and otherwise termed "gay" (it would be teal with puffy pink ink if this were in color).  Eiri, too is a lesson in contradictions.  She personifies that rare creature: the semi-butch, leather-coat-wearing straight woman.  In a more innocent age she would have been openly bi-sexual, without really experiencing anything more than trading kisses with girlfriends at slumber parties, you know, the ones Sylvia never got invited too.  We get to see her in action reprimanding her sister later.

Jared is on the other hand a deliberate stereotype, the misogynist self-aggrandizing queen.  If it isn't about her, she hates it.  I perhaps needn't italicize those pronouns, but how else would you identify an adult man who behaves like a fearful self-loathing child, verbally sparring with anyone who cares to cross her and speaking archly in case anyone is overhearing.  Loren exhibits some of these characteristics (smoking in bed, indeed!) but his focus is just on daily living and getting laid, a bit like most of us.  Being college age, he still hasn't given up the trappings of childhood: a poster of a dead hero, a favorite blanket with whimsical animals, airplanes on his curtains (were they there when he moved in?) and Mickey Mouse alarm clock; symbols of the adolescent emerging into adult life.

The juxtaposition of all these personalities I think come together well on the page, but there are consequences to all actions; what develops here will de-evolve in the next few pages.  I was always referring to other gay comic books when I was drawing this, Jerry Mill's "Poppers", Howard Cruse's "Wendel" and Jeff Krell's "Jayson", so naturally the stories that I personally experienced are repeated here in Loren and Sylvia.  You may see the similarities too.
Posted by Nathan Kibler at 11:23 AM