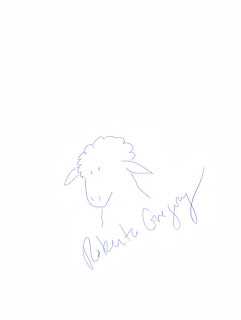 I've been a fan of Roberta Gregory's since I encountered her groundbreaking, Dynamite Damsels. Roberta has written a little about the creation of her first comic book at PrismComics.org and she includes a link to the Queer Zine Archive Project where you can currently download and read yourself. This book set the tone of all my comic book reading since I entered collage, which is to say I was reading primarily underground and independent authors and works relating to sexual politic and Gay/Lesbian lives. Which is not to say there was a lot to read, but thankfully by the mid-Nineteen Eighties we did have the Gay Comix anthology which lead to other things being published by progressive and innovative independent publishers.

I met Roberta in the early Ninties in Seattle at an art show featuring cartoonists held by The Center on Contemporary Art Seattle when it was down on First Avenue. She drew this sheep in my sketchbook and signed it right after the cartoonist's panel where the Bros. Hernandez and other artists discussed their works. Later I got a job in the Fantagraphics circulation department for a couple of years when she was working in their art department. She was publishing her Naughty Bits comic through Fantagraphics which I collected and thoroughly enjoyed.

This post is something of a departure from posting my own artwork, but I've recently acquired several more pages of original artwork with artist's signatures at the 2011 Emerald City Comicon, so I will continue with those for the next few posts.
Posted by Nathan Kibler at 8:30 AM 2 comments: