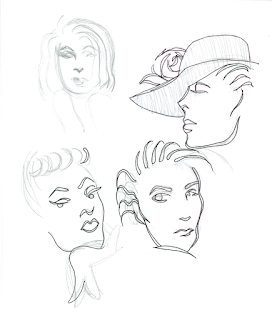 You sometimes see amazing commercial art produced in the city. These four faces were quickly sketched from oversized ink on paper illustrations as part of a window display for a Bead shop up on Broadway Ave. in Capitol Hill in Seattle, back in the early Nineties. They were clearly based on glamour portraiture of Hollywood Actresses, but the reason I captured them here was the clear and simple way they'd been rendered creating striking images for an otherwise difficult to market item: beaded jewelry.

I actually worked on these in separate sessions, riding by on the bus and holding them in my mind as I attempted to recreate the simple strokes, later inking the width and direction of the strokes. Unfortunately the display was only up for one month and it was taken down before I could capture all the strokes.
Posted by Nathan Kibler at 11:13 AM