I'm not ashamed to admit that I played a lot of Advanced Dungeons and Dragons in high school.  In fact, I am glad my parents encouraged me to read about and explore fantasy worlds, despite being fairly starched Mormon Christians at the time.  In the late nineteen-seventies I responded to a newspaper ad for someone looking for others to role-play this game with.  I'd noted similar advertisements posted at the local library, so I assumed it must be the same person and responded to the ad.  This is how I met Clayton and his wife, Terry.  Clayton was originally from Pennsylvania and had played D&D in college.  He had developed a whole world campaign that we played in over the next few years.  The original group of players was a mix of teenagers and adults that grew and expanded.

I met a lot of great people I doubt I would have met otherwise.  One of the librarians at the local public library, Mary, and her brother joined the group and I became fairly good friends with them both.  At one point I made several trips to Cour d' Alene, to visit with them when they moved out of the Sandpoint area.  Mary and her brother were always quite resourceful and developed a dungeon campaign system on 4x6 cards so that any time someone didn't have a campaign prepared she could game master one easily by randomly selecting cards from her file.

Another friend was Darin who fostered some of my interest in comic books and horror fantasy.  He began a campaign based on a gaming system called Chill, where he managed to mix a Lovecraftian inter-dimensional story with the Sanctuary fantasy series with the added feature that each player gained a new skill when in the fantasy part of the scenario.  He also began a comic book store he ran from his apartment by taking subscriptions from friends, which is when I began my comic book collecting. 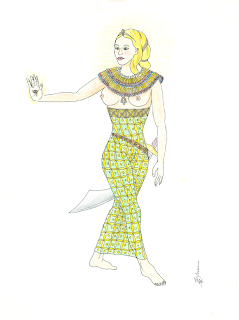 This is a portrait I drew in 1985 of my D&D character, Aurora, who was a priestess of the Egyptian Goddess Isis.  The drawing is based on the image of Isis in the Advanced Dungeons and Dragons Gods and Goddesses Manual. Unfortunately I don't remember the original artist otherwise I'd credit them here as inspiring me.  Aurora wasn't my first female D&D character and I did have a few other personae.  There was Naylor, who was my first character and was an elven multi-class character that I hoped to make a ranger.  Only he was killed off by an unfortunate encounter with hellhounds. 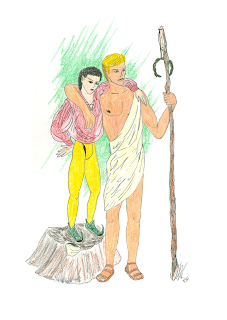 Another character I liked playing was my cleric, Balden, who is depicted in the next image with his elven friend, Trevor.  He started off being named Baldwin until I learned that was the real last name of another player, who was really cool about it.  But I wanted him to be unique and I have to admit I named him after the piano manufacturer, so I came up with something different.  I originally wanted him to worship Baldar, the Norse god of beauty, but Clayton had pretty strict rules about which gods and goddesses showed up in his campaigns, so I choose the Greek god Apollo instead.  Unfortunately his new character name brought quite a bit of ridicule from other male players, because they assumed I was referring to lacking hair on his head, which as you can see, isn't how I saw him.

Unfortunately I lost touch with many of these friends when I attended college and then came out as a gay man. I felt differently about myself, but I didn't stop playing Advanced Dungeons and Dragons.  My friend Kathy had played some campaigns in high school and we played a few times together.  I mainly played my character,  Balden, and she played her elven magician character, Trevor.  I guess it was freeing to allow my D&D character to come out of the closet as I had done the same, but for some reason my gaming interest was already waning.  I was reaching adulthood and because I felt even more an outsider, as I'd not maintained any of my previous friendships, I soon lost interest in pursuing fantasy role-playing, preferring the real role-playing we do as adults.
Posted by Nathan Kibler at 8:47 AM