Paula and the Purple Rayz 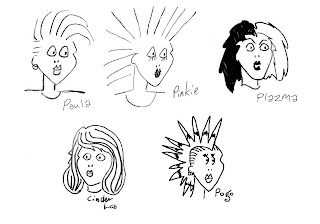 I promised a post about Paula and the Purple Rayz, another of the projects Kathy Sprague and I developed.  We originally devised this storyline as a comicbook, but after doing Loren & Sylvia I realized it would take me more time than I was willing to commit to develop the layouts.  So I suggested to Kathy that we turn the script she'd written into a radio play.  It was a small success at the student run radio station on campus at the Uof I, in Moscow, Idaho.  We invited all our friends to contribute voices for the various characters, deliberately playing against gender to hilarious effect. 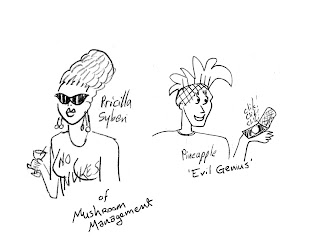 I was assigned the voice of Pricilla Syben, the band's manager.  During our first recording I had a mild cold and began to loose my voice, which was perfect for her "Hollywood" character.  Subsequent recordings I did my best to give Prisilla the same husky quality to her voice, which wasn't easy. Over the seven episodes Kathy wrote and produced, we developed a loyal following of listeners, both on campus and within the larger community.

The storyline was pure word play and invention as all the characters had names beginning with the letter "P" (save Cinder Lou), frequenting cities from Prague to Puyallup.  At one of the celebratory parties after an early recording session we asked everyone to bring a food that began with the letter "P".  So there was a plethera of potluck potatoes, pineapples, peanuts, "pork porridge" and Pabst Blue Ribbon.  The basic idea was a mix of Wonder Woman's origin story and Jem and the Holograms, one of Hasbro's attempts to work with Marvel, which also produced the animated GI Joe and Transformers, only rather than the cheesy pop-music you encountered in Jem, we decided the band was a punk garage band. 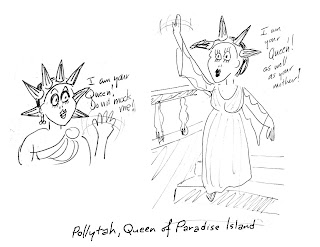 Here is Paula's mother, Pollytah, Queen of Paradise Island saying two of her most popular lines.  Kathy and our friends would often repeat these catchphrases as if we were the Queen-mother, arm raised and voice modulated in a faux British accent.  These two drawings are not my original designs.  Instead our friend Ari Burns had attempted to copy my style and came up with the Grecian dress and pointy headdress.  She was intentionally aping the Statue of Liberty.  After seeing Ari's version I drew up these two images, based on her design. 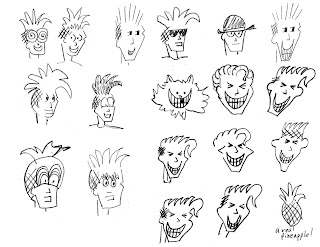 It took me quite a bit of drawing to come up with suitable characters. I filled my sketchbook with page after page of just character head-shots.  Here is the villain character, Pineapple in a series of quick sketches, playing with how Kathy described him, a cross between the Cheshire Cat and The Joker from the Batman comic books. 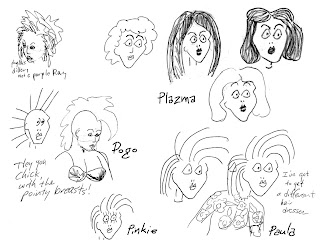 Here are some quick sketches I did for the members of the band, who were all women.  Up in the left corner was a sketch that brought a strong reaction from Kathy, so I labeled it so that I wouldn't use it by mistake.  One of the running gags in the storyline is that anyone listening to the band is transformed, playing off the hysteria in the Sixties that Rock and Roll music was changing the youth of America into sexually liberated fiends.  Here is a quick sketch of Sylvia as if she were a member of the audience. 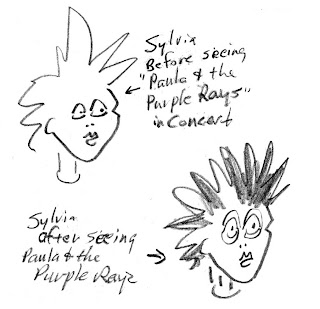 Posted by Nathan Kibler at 4:46 PM