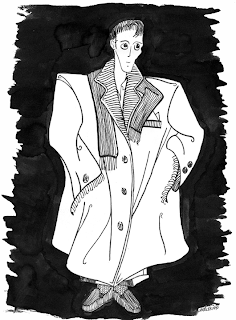 At some point while hanging out on Capitol Hill in Seattle, a young Japanese-speaking woman accosted me because she saw me carrying my sketchbook and asked to see my artwork.  She liked this portrait of a young man in a coat and asked if she could have it.  I was still quite attached to it, but I did give her another figure this was based on.  Later when considering characters for my forthcoming novel, I remembered this picture and decided this young man with the big eyes would be my protagonist.  Thusly, I've named him Eon.
Posted by Nathan Kibler at 8:45 AM