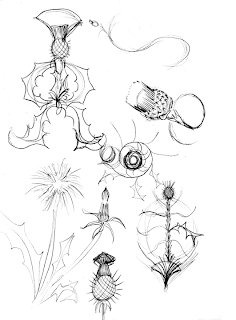 When I first moved to Seattle I shared an artist's loft with a young man named Tod Streater. He was a costume designer and a very good person with big ideas. He admired my own design skills and asked me to design a tattoo for him.  I wrote a fictional account of our lives which appeared in my zine, Gaeraj and I've posted at my web page.

I'd never designed a tattoo before, so it was a great challenge for me, but also an opportunity to test myself and my design skills.  Tod and I had discussed it after seeing Disney's "Fantasia".  His favorite sequence was the dance between thistles and orchids, set to Tchaikovsky's "Trepak" music from the Nutcracker Suite.  He asked me to design a "dancing" thistle.

You can see above left a literal interpretation from the Disney film, and below right a stylized design that I think was based on art nouveau era wallpaper.  Some how a dandelion came into the picture, perhaps because they are similar.
Posted by Nathan Kibler at 8:35 AM