Loren and Sylvia do Don Giovanni 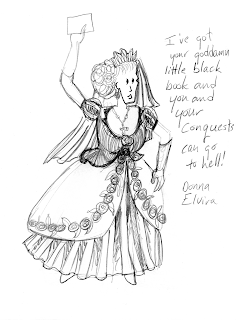 Kathy Sprague and I are both fans of opera.  We both developed our tastes because of our mother's backgrounds.  Kathy's mother once worked as an opera singer and my mother had the opportunity during her childhood in San Diego to appear on stage of a production of Aida, which has formed a life long interest in music and singing.

Still, this title isn't quite accurate because I've never done a sketch of Sylvia dressed as Don Giovanni and I'm not sure I'd cast her in the role because it would be odd to have Loren as Dona Elvira.  These sketches happened because I was watching a production of Don Giovanni on television (I think it was the Metropolitan Opera in New York) and really liked the detail of the women's costumes.  If you are unfamiliar with the storyline, Don Giovanni is quite the ladies man, but has been around the block a few too many times.  Eventually he encounters a ghost which calls on him to repent or face the fires of Hell.

This other sketch of Dona Anna features Jared from Loren and Sylvia.  After doing these I realized it could be a sequence for the comicbook, perhaps as a dream.  I so love the drama of opera. 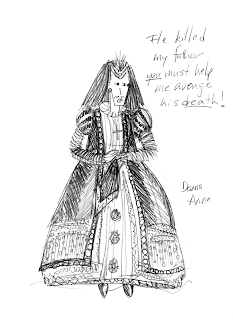 Posted by Nathan Kibler at 8:39 PM