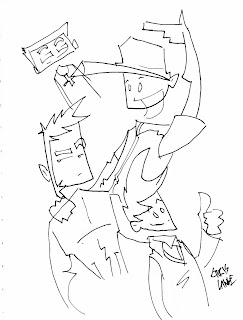 Jon Macy pointed out to me Chris Lange's artwork last year. I met Chris at the Prism Comics Booth at the 2011 Emerald City Comicon. He's been posting his web comic at Capitol Hillbillies since 2007 and had a small chapbook of his strips published by Northwest Press. His eclectic and graphic style stands out for its ability to engage the reader and yet the topics of his strips are definitely not work safe. Chris's humor is adult, sarcastic and definitely campy, referencing pop music stars, porn stars and Internet sites. What you get is a contemporary pro-safe-sex observation of "twenty-something" gay culture.  In the sketch above the comic strips character's names, as best I can tell, beginning in the upper right corner with Stu pointing his finger, then John in the lower right corner, William to the lower left and finally Clark in the upper left with the cross hanging from his neck...Hey Chris, let me know if I got their names wrong!
Posted by Nathan Kibler at 8:32 AM