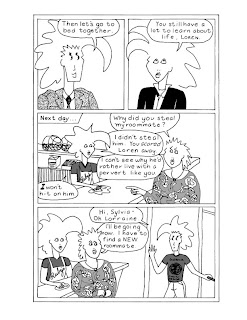 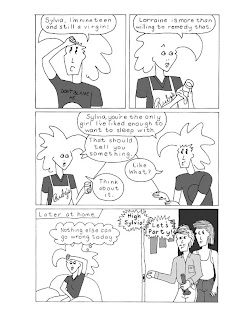 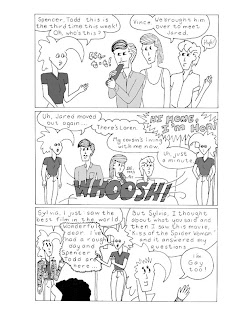 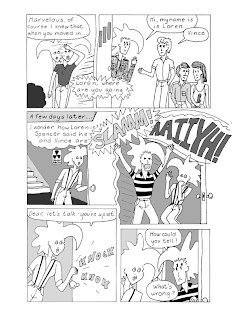 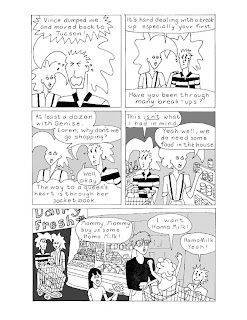 Lorraine is based on various women friends both I and Kathy roomed with at different times. We never did get along well with these women as there always seemed a big gap between our values and theirs. I suspect they didn't get that we were gay and what that meant, but that's perhaps my own prejudice.

Here we meet Sylvia's friends, Spencer and Tod, which were based on a gay couple we both knew. We also see to what extent pot smoking was common place in our lives. We intentionally never brought attention to the bong and what they were doing with it.

There is a lot of psychology in Sylvia's move to the door when Loren arrives. Also too much story telling. I really did come out after seeing "Kiss of the Spiderwoman".

I really wanted to show more of Loren's relationship with Vince, but for the sake of story telling we cut to the drama. I think some day I will have to write in the romance section.

The last panel is a story that Kathy told several times before we decided to include it in the comic. It is a good closing joke. Middle America is so naive and ironic.
Posted by Nathan Kibler at 4:46 PM 2 comments: 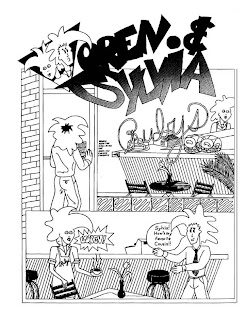 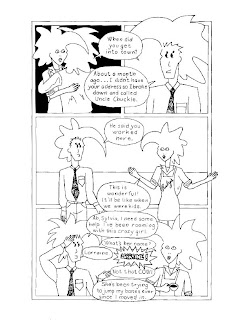 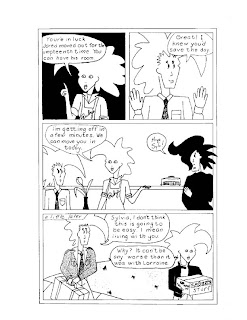 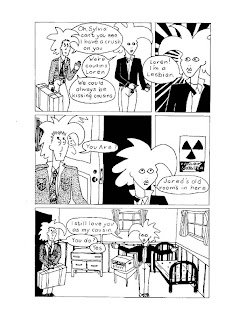 First four pages of Loren & Sylvia. Written by my friend Kathy Sprague and drawn by me, Nathan Kibler. The characters Sylvia and Loren are drawn directly on ourselves and the supporting characters are all based on composites of our friends, but the stories are mostly reactions to the culture of the time in a small college town in Idaho. This is autobiography with tongue firmly planted in cheek.

Kathy and I were friends, but we thought the idea of "kissing cousins" was too perfect to pass up. I still wonder why we never did any back story for Loren and Sylvia's childhoods.

Wayo is a composite of several friends. He's mostly a supporting character, but he shows up at a party later in the unpublished section I will post at some later date.

I lived with Kathy for a time and rented the basement bedroom from her and her brother, who also lived with us. It was a good sized room and I enjoyed living with Kathy. It was also an official fallout shelter, thus the sign on the wall...
Posted by Nathan Kibler at 1:30 PM No comments: