Returning to my sketchbook posts, here is a quick sketch of contrasts: a man and woman with exaggerated physiques. Gender issues have always played into my own identity, so naturally in my sketchbook, I've played with how our society tends to point-up certain aspects of gender while downplaying others. This first sketch plays off the differences between men and women. 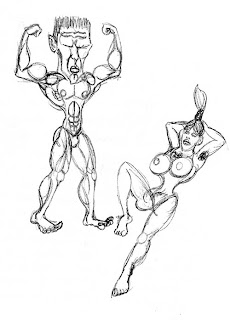 I've suggested the passivity of how women have been depicted in the past century by drawing the female relaxing at the man's feet, but she is also proudly displaying less characteristic feminine traits like chest hair and hairy armpits. The man, in contrast is depicted with a swollen head, like a Mardi Gras costume, and yet his sexual traits are minimized. I named these two "Butch Man and Nelly Girl", then later played around with the idea that those names made them seem to be superheros. But what would their super powers be?

This next image is a cartoon I did much later depicting what those superheros would be like. They start by observing how stereotyped their schtick is; but rather than breaking them, only confirm it more by their actions. Is this an effective way society teaches us about gender? Probably not. 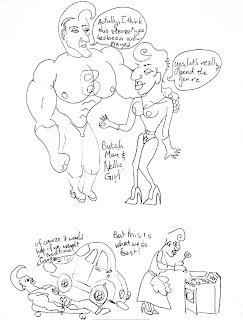 Posted by Nathan Kibler at 8:10 AM No comments:

In working on this project, at one point I began to experiment with ink and white gouache to see if I could conceive the artwork as depicting a silent black-and-white film. The following images I derived from my morgue that I'd assembled to help decide and fix the style of the film. I did several paintings in this style focusing mostly on people. I included a lot of images of women although they don't really figure in the story, but I did want to use them in the dream sequence. 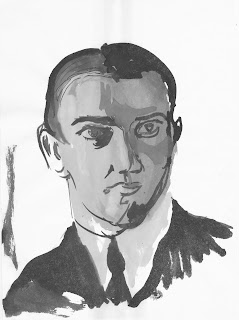 This is based on a portrait of Nijinsky, the Russian ballet dancer. I thought the protagonist in the film would look something like this.
This image reproduces a poster of drag performer Joey Arias. I often salvaged posters for collage material from the street. I really liked the mood of this image and how dramatically it crops the face.
This portrait based on a promotion still of silent screen actress, Theda Bara, I liked the contrast and the expression. 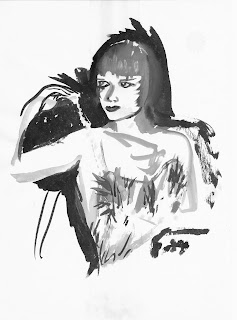 A publicity still for Louise Brooks in "The Canary Murder  Case" provided the inspiration for this image.

This is a fashion photo from the Nineteen fifties. The stance of the model seems suggestive of a visual story.

I've always been inspired by the Russian designer Erte', so I have often referred to his work.

Another Erte' design, I love the Grecian sleeve and tunic form, used here for great effect.
Posted by Nathan Kibler at 8:34 AM 2 comments: